Last week I was looking through Instagram and came across a fabulous card by Nichol Magouirk. It was made from a mix of images from different stamping companies, and the idea of this really took my imagination. As well as this, I’ve been thinking for a while about using the smaller images on many of my stamp sets.

When I buy a stamp set, it is usually because I am taken by the main image, and sometimes I don’t even look at the little bonus images that come with the stamp set. Not this time though!

This card has used images from My Favourite Things, Simon Says Stamp, Lawn Fawn, Paper Smooches, , Mama Elephant, Penny Black and Power Poppy. All except the Powerpoppy image (which I partially inked) are smaller images. 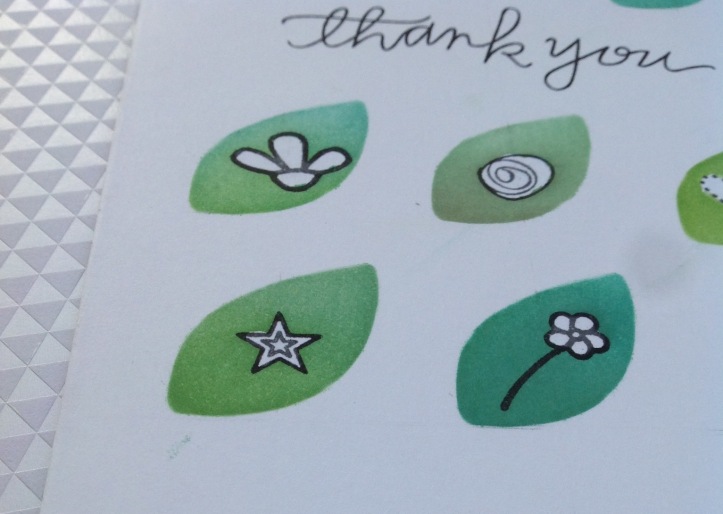 The card looks simple, but actually it took several steps to make it. First, there was quite a bit of measuring to make sure the images fitted evenly on the card. I then cut a leaf stencil using Simon Says Stamp “One with Nature” dies, and used this to centre the small images. Once this was done, the images were masked using masking fluid; then the ‘stencil’ was replaced and the leaves were ink blended using Distress inks. Finally the sentiment from Simon Says Stamp ‘Many Thanks’ completed the card.

The rounded corner? Whilst I really like it, in the interests of honesty, I must declare that I went out of the lines while ink blending. While I could scratch off most of the damage with my craft knife, taking the corner off helped too! It’s a classic example of necessity being the mother of invention. I actually love he way the rounded corner echoes the shape of the leaves, but I wouldn’t have thought to do it without the original blooper.